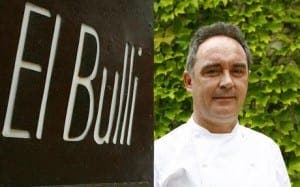 PLANS to expand the world-renowned el Bulli restaurant into a gastronomic hub have taken a blow.

Chef Ferran Adria has been forced to scale back his plan to expand the site by 300% after environmentalist protests.

Adria wanted to create a mega, gastronomical think tank on the site of the former 3-Michelin star restaurant.

El Bulli – in Cala Montjoi, on the Costa Brava – was named the world’s best restaurant a record five times before it closed in 2011.

Reopened as a museum and creativity centre in 2014, Adria wanted to turn it into a creative hub for Spain’s best chefs.

The restaurant is located in the Cap de Creus Natural Park and those opposed to the expansion claimed it would be a breach of environmental law.

Instead, Adria will now expand the site by just 20% and is due to open the doors once more next month.