THE picture-perfect hilltop town of Casares has come a long way since neighbouring Gaucin coined the ditty: ‘In Casares buy bread and don’t hang around’ (‘En Casares compra pan y no te pares’).

And given that Brad Pitt, Axl Rose and Peter Andre all chose to ignore that advice, modern Casarenos have the last laugh. And then there is Julius Caesar, after whom the town got its name, when he dropped in for a dip in its healing waters a few centuries back.

The Roman emperor is said to have taken to the healing, sulfurous waters of La Hedionda, currently under renovation (and sometimes falsely attributed to Manilva), below the town.

Alleged to have been suffering from something of an itch, after a couple of days he is said to have cleared it up and given the tiny settlement his royal Roman seal of approval.

It led to the town inheriting the name Caesaria, from which Casares eventually emerged, and for the spot to become sometimes known as the Roman Oasis, not to be confused with the same name restaurant nearby.

It is set in a beautifully lush valley, through which a footpath takes the more adventurous on a lovely hour or two hike up to the white village above.

One of the Costa del Sol’s most stunning walks it criss-crosses rivers, takes in ruined mills and offers up some of the best scenery of karst rocks and distant mountains.

Wherever you head, you will inevitably see vultures, eagles, kestrels and other majestic birds of prey soaring over the vertiginous village.

The village itself is well worth a poke around, with its charming white streets and handful of shops and restaurants.

It is one of the most photographed of Andalucia’s celebrated pueblo blancos and is topped by a ruined castle and church.

Such is its fame that Brad Pitt and Angelina Jolie recently took a spin around the village, allegedly ending up buying bought two pieces of art at the Studio 54 gallery.

TV presenter-turned-politician Robert Kilroy Silk liked the place so much he bought an incredible two swimming pool mansion on the outskirts, which he sold last summer.

The area also boasts a large expat population, with Casares Costa officially hosting 1,000 Brits among its population of 2,570, although the expat presence is considerably higher than the latest padron (electoral role) suggests.

It is no surprise, having one of the coast’s best beaches, stunning views and excellent connections to Sabinillas one side and Estepona the other.

Dublin journalist Diarmaid MacDermott is just one of many smitten resident expats. He arrived in 2001 and now broadcasts a weekly summary of the news in English on Radio Casares.

“I fell in love with Casares when I first came here almost 15 years ago,” MacDermott told the Olive Press.

“The beaches were lovely, the old town very interesting and the people were very friendly and open. I like the contrast between the mountains, where Casares is situated, and the coast and sea only a 12km drive away.”

He added: “It is a good base to visit many other interesting places in Andalucia, with Gibraltar and Marbella within easy reach and the Costa de la Luz only a short drive away.”

For a more authentic Spanish experience, head to Secadero where the orange tree plantations extend for hectares.

You might even bump into its most famous resident, Europe’s number one amateur golfer Mario Galiano who continues to make the locals proud of his killer swing.

With three courses, Dona Julia, Casares Costa and world-famous Finca Cortesin he gets plenty of practice.

The latter is one of Andalucia’s leading courses with a stunning five-star hotel to match.

While Real Madrid forward Gareth Bale and Everton captain Phil Jagielka have been spotted playing the course, celebrities including Axl Rose, from Guns and Roses, Patrick Stewart, from Star Wars and Angelina Jolie and Brad Pitt are said to have stayed there.

But Casares has also become synonymous for something else over the last couple of decades… dining!

It’s famous road up to the coast counts no less than half a dozen excellent places to eat, while the village itself also counts a couple of top eateries. See article on page ???

Head out of town on the Gaucin road to find emblematic Queseria Sierra Crestellina cheese factory, where you can buy day-old fresh cheese, two-month-old semi-cured and four-month-old cured cheese.

Running for four generations, there are farm tours for the kids and tastings, and a ‘make-your-own-cheese’ day. First, milk your goat!

Back down on the coast, a new beach scheme will introduce kayaks, a massage service and more help for the disabled, while the town has now applied for blue flag status.

It is down here on June 23, that you will find one of Casares’ best nights out. 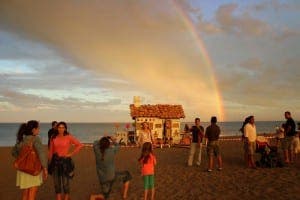 Celebrating the longest day of the year San Juan is hard to beat with its fireworks, live music and massive beach bonfire.

As long as you wash your face and feet three times in the sea, a happy year is guaranteed… I did it last year and I haven’t looked back! 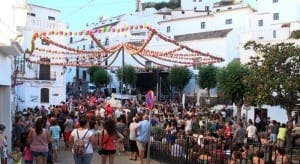 The cultural calendar includes Culture Week which brings street theatre, flamenco and a book fair to town from April 25-30, and an annual summer music festival in June or July.

Duracell bunnies can take on the 21km Mountain Race Challenge on April 10, while there is also a ‘beginners’ race of 10km and a 500m kids race.

Meanwhile film junkies are being invited to make their own Casares blockbuster for the third edition of the Andalucian Film Festival, split in two parts: the 48-hour film competition (June 3-5) and the main festival with Spanish screenings (June 6-11). 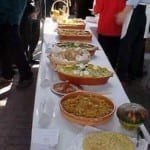 The annual food festival (jornadas gastronomicas) on April 23-24 turns the streets into an open market with stalls groaning under the weight of cheeses made from the endangered Payoya goat, ‘chivo’ kid meat and the town’s signature bread.

Rosario Lorin has lived in Casares for 26 years and runs Ecotours Casares from the tourist office.

“Casares is popular with tourists but at the same time it conserves its traditions and its village life. It’s not like other places on the Costa del Sol, it’s more authentic and has beautiful views and great walks in every direction.”

Montse Espinilla lives in Casares del Sol and runs an artisan shop under the arch on Calle Villa.

“Casares has everything: mountains, sea, nature and tranquillity – everything you could ask for for a good life well lived.”