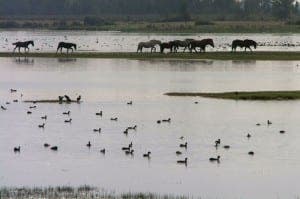 SPAIN has been warned to stop tapping Donana World Heritage site for water or else.

More than 1,000 illegal boreholes are draining the aquifer of one of Europe’s most important wetlands.

Spain has two months to improve the state of the water deposits before the commission takes the case to the EU’s Court of Justice.

The ultimatum is the second phase of a European infringement procedure that began in 2014 following a World Wildlife Fund complaint.