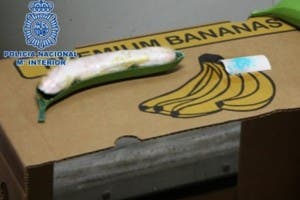 A MAMMOTH cocaine stash was found hidden in synthetic bananas at the port of Algeciras.

The fake bananas were found packed in 19 boxes following an investigation into drug smuggling from South America by police and customs agents.

Each box contained 88 plastic bananas and are believed to have come from the town of Turbo in Colombia.

The haul, destined for Huelva, is the second attempt halted by Spanish police recently, following a shipment of furniture made entirely of cocaine paste in April.

Algeciras has long been the Europe entry point of choice for Latin American smugglers.