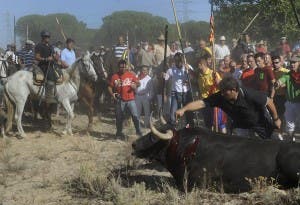 THE gruesome killing of bulls at Spain´s most notorious festival has been banned.

Animal rights activists have claimed a major victory after the government of Castille y Leon banned the slaying of bulls at the annual Toro de la Vega festival in Tordesillas.

The festival has become an epicentre of animal rights protests due to its particularly sinister killing method.

Bulls are murdered with spears after being pursued on foot and horseback.

Rights group PACMA said the ban is a ´historic step´ towards the full elimination of bull killing in Spain, but warned that the regional government´s decree must still be approved by the regional Parliament.

The town´s mayor told reporters his administration will appeal the ban in court.

The decree labelled the ban as a response to the rise in animal protests and the changing times, sensitivites and ethics of Spaniards.