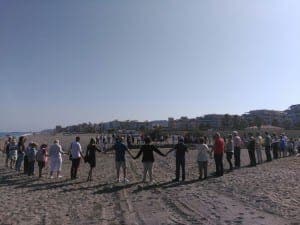 RESIDENTS in Manilva and Casares have taken to the beach in protest over the unfulfilled promise of a coastal pathway.

Around 100 people turned out to form a human chain after waiting nine years for a four metre bridge to connect the two towns.

Representatives of Ciudadanos in Manilva and Casares supported the protest, claiming that tourism, catering and real estate agents had all been affected by the lack of a coastal walkway.

“So far, there has been nine years of excuses from both town halls,” Miguel Martinez, of Ciudadanos Casares said. “To wait so long for a simple bridge to be built over a small river demonstrates sloppiness and lack of political urgency.”

Meanwhile, Mercedes López, coordinator of Ciudadanos on the Costa del Sol said that the project should never have dragged on this long.

“It should have been completed within three months of signing it off,” she said. “We are demanding less bureaucracy and more efficiency.”