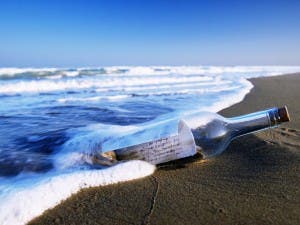 A MESSAGE in a bottle has been found by a Spanish fisherman after leaving the US three years ago and travelling 3,000 miles.

Maine teenager Terra Gallo was 11 when she sent the bottle into the ocean, and had forgotten all about it, but admitted it was ‘pretty cool’.

As requested in the original message, the fisherman who found it in the Bay of Biscay has since added in his own message and sent the bottle back into the ocean.