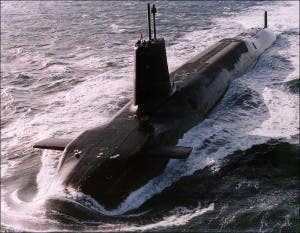 THE UK sent a nuclear submarine to Gibraltar yesterday in a show of force against Spain.

The move was seen as a response to the Spanish who, emboldened by the shock Brexit result, had demanded joint sovereignty over the Rock on the very same day.

It was Spain’s Foreign Minister Jose Manuel Garcia-Margallo who said Brexit meant a “complete change of outlook” over the ‘disputed’ territory.

Mr Garcia-Margallo said: “It’s a complete change of outlook that opens up new possibilities on Gibraltar not seen for a very long time.

“I hope the formula of co-sovereignty – to be clear, the Spanish flag on the Rock – is much closer than before.”

Insiders said the arrival sent a clear signal that the UK will never negotiate the Rock’s sovereignty.

A source said: “The timing could not be better, the people of Gibraltar are being a sent a clear message of reassurance.

“There will be no discussion on joint sovereignty – the UK Government has made that clear.”

While the visit had long been planned, Navy insiders reportedly said the timing proved ‘interesting’.