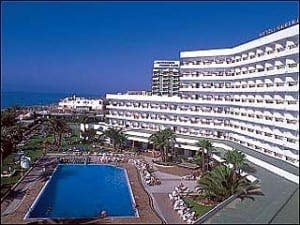 A BRITISH man has spoke of his ‘terror’ after a man tried to snatch his four-year-old son from a hotel in Almeria.

Mancunian Shaun Kennedy was left with a bloodied face, a swollen hand and a twisted knee after fighting off the child snatcher at the Hotel Best Sabinal.

The man struck up conversation with Kennedy and his son Chase before attempting to pull the four-year-old from a lift as the doors closed.

Chase suffered carpet burns on his legs as the abductor dragged him along a hotel corridor.

Kennedy then grappled with the man to get his son back.

“It has really shaken me up and I’m still in shock,” he said. “He was looking at Chase and saying hello. I turned to Chase and asked him if he was going to say hello back and he did.

“I just thought that the man was being nice – nothing more to it.”

The police are investigating the incident.