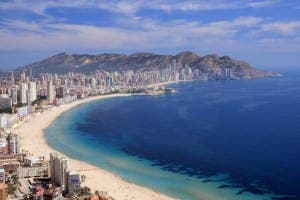 THE family of a 75-year-old British man believe Spanish police ‘covered up’ his murder.

Great-grandad Alan Rankin was struck on the back of the head, most likely with a hammer, before being found at the foot of a cliff in Benidorm, an inquest has heard.

His family now believe that Rankin was murdered and that Spanish police covered it up as an accident two years ago.

Alan’s brother David said: “I believe it’s 100 per cent a cover-up. The police have covered it up completely and blatantly. We know it was murder.”

The coroner has also slammed Spanish cops for being ‘unhelpful’ and refusing to investigate the crime.

She added that his family may never find out what happened to Nottingham-man Rankin while on a family holiday in October 2014.

Spanish police original stated that Rankin’s injuries had been sustained by rocks along the cliff face.

However analysis by British forensic pathologists has shown that Rankin recieved a blow to the head before falling down the cliff.

A wallet with £450 in euros inside was missing when he was found.