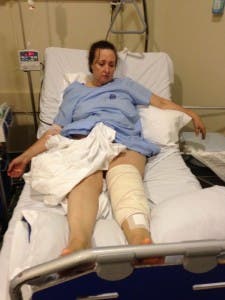 AN Irish expat is seeking compensation after the driver of a coach fell asleep and nearly killed his wife in a fatal crash in Morocco.

Michael Maye, 70, who lives in Marbella, is demanding answers after his wife Maria escaped death when the vehicle smashed into a lorry that was transporting gas canisters.

The crash caused an explosion that instantly killed the driver and several passengers in the first two rows.

The 56-year-old, who was sat further back, said she passed out and woke to a ‘nightmare’.

“There was blood all over my hands and I could not move my legs,” she told the Olive Press, “It was awful.”

Mrs Maye, who has been a Spanish resident for 30 years, was travelling on the 23:45 coach from Casablanca to Tangier on September 14.

She is now recovering at the Quiron Hospital in Marbella, where she has had to undergo major knee and leg surgery costing over €6,000.

The couple now fear they will have to pay the entire bill, with the Moroccan authorities even failing to confirm the crash.

“We are trying to find a police report of the crash but the authorities are not being cooperative,” said Maye, who has instructed lawyers.

“We cannot prove it for certain but the company is said to be part-owned by the King who doesn’t want any negative press,” he said.