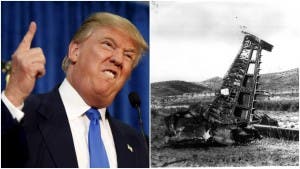 SPAIN is concerned that new US president Donald Trump will renegotiate the Palomares clean-up agreement.

Signed between the two countries in 2015, it commits the US to cleaning up the site in Almeria, where a B-52 bomber went down with four hydrogen bombs in 1966.

The area became heavily polluted after the non-nuclear detonators from two of the bombs exploded, contaminating two square kilometers with plutonium.

Madrid and Washington had agreed in October 2015 that the US would foot the €640 million bill to remove 50,000 cubic meters of contaminated soil.

But the agreement could not be implicated due to Spain’s crippling political deadlock throughout most of 2016.

They then had to wait until the result of the US presidential election as the cost of the agreement meant the Obama administration could not push it forward on its way out.

The recent resignation of US amabassador to Spain James Costos means it is likely Trump will renegotiate the terms.