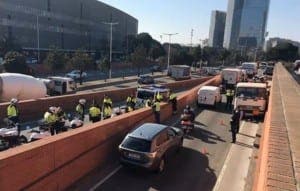 A STOLEN truck carrying gas cylinders has been halted by Barcelona police after a high-speed chase.

Police managed to stop the truck while it was speeding the wrong way along the Ronda del Litoral motorway.

The truck was carrying dozens of butane gas cylinders, some of which were thrown off into the road during the chase.

The man has been arrested and taken to a medical facility. He has been named as Swedish national Joakim Robin Berggren.

It appears that the man stole the truck at 10.40am on Tuesday morning from Vila Vila street, where the driver was delivering gas canisters. 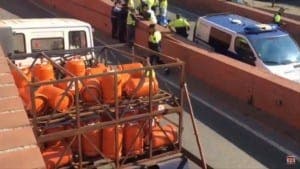 Police chased the vehicle from that area, until finally managing to halt the truck after an 11km chase by shooting through the rear windscreen.

Counter-terrorism police have launched an investigation into the driver’s motives.

The truck rammed into several other vehicles during the chase, and one woman has reported minor injuries.