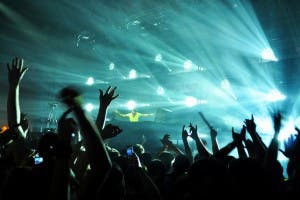 A NIGHTCLUB in Spain has enraged feminist groups for offering free entry, drinks and €100 to women who ‘go commando’.

The Barcelona-based club – Bailodromo Caña Dulce – has been branded as degrading and sexist after offering the deal to females who can prove they are wearing no underwear.

Dones Juristes, a local group promoting rights for women and children, said it is considering lodging a formal complaint with authorities over the contents of a poster announcing the offer.

A promoter for the club shrugged off the criticisms, saying the deal was a publicity stunt.

The unnamed club worker tole El Pais: “If you’re not talked about, you don’t exist.

“This is nothing more than a joke in a very family-orientated place, where everyone knows each other.

“It all began one night when a woman who was about to get married decided to do a striptease and gave me the idea for publicising the nightclub in a new way.”

Only two women took up the offer, which applied on Saturday nights throughout February, with one reportedly asking her husband’s permission before proving she was going ‘al fresco’.

She said: “It’s one of the worst things we’ve seen.

“Its message is insulting and humiliating towards women.”

There have now been calls on Facebook to boycott the club.