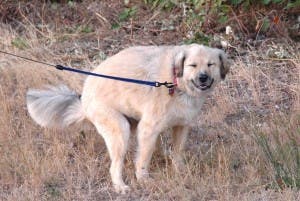 MALAGA has introduced compulsory dog DNA profiling in a bid to curb the amount of dog poo being left on the ground.

In accordance with the new rules, implemented on Monday, owners must pay €35 for a genetic analysis of their pooch before it is fitted with a small tag on their collars which will include their name and an identification number.

It is hoped the tags will also prevent owners from abandoning or mistreating their animals.

Failure to register your furry friend will result in a fine of between €110 and €130.

“The idea isn’t to fine people for the sake of it, but so that the measure works properly, which means that there has to be an element of sanction involved,” said Raúl Jiménez, the head of Malaga City Hall’s environment department.

The city’s animal and bird collection service will send any stools it finds for analysis at a cost of €18, where it will be checked against the DNA registry.

Malaga is the first big city in the country to introduce the measure.

Owners have six months to register their pooches.