A SCULPTOR whose statue of Cristiano Ronaldo was blasted by fo 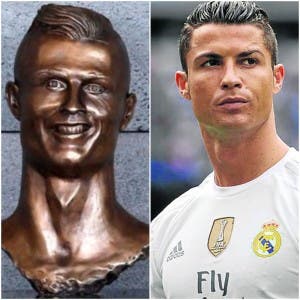 otball fans has come out in defence of his artwork.

Artist Emanuel Santos said the bronze bust was not ‘as simple as it seems’ to create.

It received widespread condemnation from fans around the world after it was revealed on the Portugese island of Madeira, where the airport was being named after the Real Madrid striker.

“It is impossible to please the Greeks and Trojans. Neither did Jesus please everyone,” Santos said.

He added that it took him 15 days to complete and that the piece was a ‘matter of taste’.

“Cristiano saw the photos that his brother sent him,” Santos told broadcaster Globo.

“I was with his brother at Cristiano’s museum in Madeira and from the messages he sent, I could tell that he liked what he saw.”
Santos said Ronaldo had asked him to make minor changes in order to make him look younger.
“He only asked for some wrinkles that gave him a certain expression in his face when he’s about to laugh to be changed,” he said.