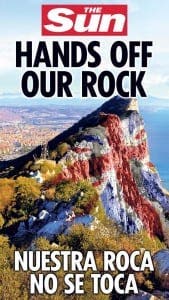 The UK publication launched the campaign on its front page this morning, demanding that ‘Spain and the UK take their hands off our Rock.’

It said it became concerned after Theresa May refused to rule out talks with Madrid over the Rock’s future.

Chief Minister of the overseas territory Picardo has supported the move, saying ‘it’s great to have The Sun onside.’

He also called for May to rule out any Gibraltar talks with Madrid.

“It’s time for the British government to rule out any bilateral veto for Spain and stand by Gibraltar,” he said. 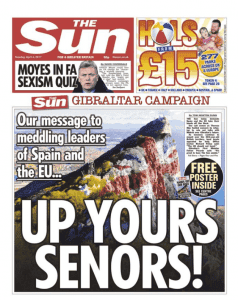 “Otherwise Spain will be able to dictate terms to us and that will be totally unfair.”

While May has promised the sovereignty of Gibraltar will not change, she did not rule out talks with Spain, saying that she wanted to get the ‘best possible deal’ for London and Madrid.

The Sun has urged its readers to ‘make the strength of feeling known on keeping Gibraltar British.’

It also gave its readers a special pull out poster of the Rock, and urged them download special screensavers for their phones and devices to show solidarity.

Picardo has since thanked the British tabloid, saying: “The Sun’s reputation proceeds it.

“It’s always The Sun what wins it, so it’s great to have The Sun onside.”

He said: “What The Sun is doing is sending a very powerful message to show British people are full square behind the people of Gibraltar. It is an excellent idea and I commend The Sun for doing it.

“Sitting down with Spain to discuss Gibraltar’s future on a bilateral basis should be completely out of the question.”

John Culatto - 1 Dec, 2022 @ 15:13
HEALTH chiefs in Gibraltar announced they would start offering a 99% effective HIV medication to those most at risk on World AIDS Day. It formed...