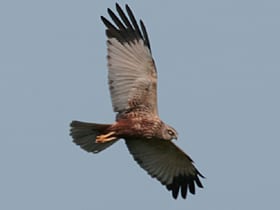 A VULNERABLE species of Andalucian bird is booming again thanks to a conservation project.

A total of 693 Marsh harrier nests have been found in the region this breeding season, the second highest level since data began to be collected in 2004.

The findings are a big boost for the Junta, which has been working with ecologists, volunteers and farmers to bolster the numbers of the bird, most commonly found in the south of Cadiz.

Teams have carried out a number of measure to increase the population, including leaving trees near nests untouched, delaying ploughing until the chicks have grown,  moving the nests to safer places and rescuing chicks.

The birds can be found in all Andalucian provinces bar Almeria, with Sevilla home to the largest population overall.

Jorge Hinojosa - 26 Jun, 2022 @ 09:15
THE price of fresh fruit and vegetables is soaring in Spain thanks not only to nationwide inflation and a rise in transport costs with...