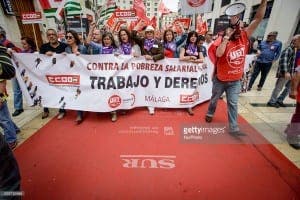 SOME 16,000 people took to Malaga’s streets this morning for an International Worker’s Day demonstration.

Protesters taking part in the march, which carried the slogan ‘There are no excuses’, demanded stable employment, fair wages and pensions and more social protection.

The demonstration began at the Alameda de Colon and ended at the Plaza de la Constitucion.