HE is, not exactly, what one would describe as the fountain of all youth!

Clearly overweight, the former heavyweight boxing champion Tyson Fury has been filmed running through a fountain at night in Marbella.

While the pictures might suggest he is just another inebriated tourist, he is in fact on a rigorous training camp at nearby Macklin’s Gym with WBO World middleweight champion Billy Joe Saunders.

Intending to shed the pounds in the run up to a fight with champion Anthony Joshua next year, he has been posting numerous videos and pictures on social media, including himself and Saunders running through a fountain late at night ‘to cool down’.

He claims to have lost 1.28 stone during the training and is now down to 26 stone in the run up to what he claims will be his ‘easiest fight’. 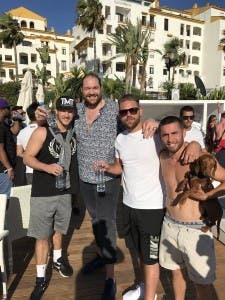 Fury also posted pictures of himself at the Barber Club in nearby Nueva Andalucia.

The fighter, who remains unbeaten in 25 bouts, relinquished his WBA and WBO titles after admitting taking cocaine and is currently suspended by the British Boxing Board of Control.