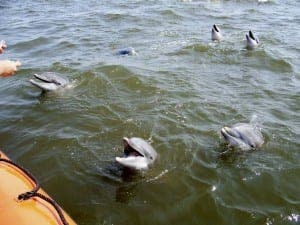 A BAND of bandit dolphins have been fingered for plundering fish from nets.

The pod of Malayo dolphins are being hunted for continually stealing from fishermen off the Costa del Sol.

Looking for an easy meal, the Robin Hood-style amphibians sneak up on fishing boats and rip open their nets after they have landed a big haul.

The problem has got so bad that fishermen at Caleta de Velez port, in the Axarquia, have pleaded for the authorities to step in to help.

They claim the dolphins are causing them hundreds of thousands of euros in damage .

Caleta port spokesman Mari Carmen Navas revealed that the plucky dolphins circle the boats in a ‘determined manner’ before swooping.

She then said that they ‘wait until the nets are full before plundering’ the hauls of mostly sardines and mackerel.

One attempt to put off the dolphins has fallen on deaf ears, after attaching speakers to the boats to simulate the sounds of whales.

“But the dolphins quickly worked it out and were not put off,” said Carmen.