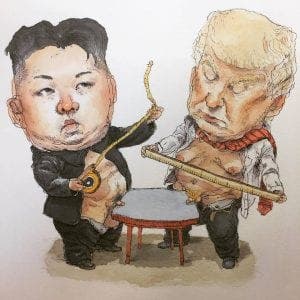 AS the US and North Korea square up with their nuclear toys, Olive Press Mason Cox uncovers the incredible near miss that almost wiped out Andalucia during the last Cold War

“But all of a sudden, all hell seemed to break loose,” US Air Force pilot Major Larry G. Messinger on January 17, 1966, after a nuclear spy mission goes wrong over Andalucia.

“They will be met with fire, fury and frankly power the likes of which this world has never seen before,” President Trump on North Korea, August 8, 2017.

Messinger and Trump’s statements, although separated by five decades, are almost interchangeable as our post-Cold War world begins to look scarily like the 1960s. 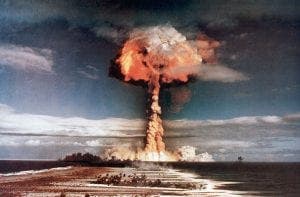 With the rise of North Korea’s nuclear capability and the United States’ stance towards the rogue nation, the stage is again set for two nuclear powers to flex their muscles in an attempt to personify the ‘Don’t Mess With Us’ narrative.

And although no nuclear weapons were fired some 50 years ago, there were dozens of near misses, some of which could be repeated if today’s trend continues.

But, how many people know that perhaps one of the biggest nuclear disasters to strike in peacetime actually happened in the late 1960s right here in Andalucia.

It was on a sunny January morning during the Cold War in 1966 that a US B-52 bomber carrying four nuclear H-Bombs was scheduled for mid-air refuelling 9,450 metres off Spain’s Almeria coastline. 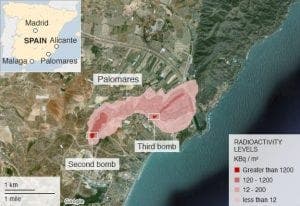 US nuclear deterrence at the time hinged on the constant aerial monitoring of the USSR’s borders, code-named Chrome Dome.

This particular bomber was on the return leg of a non-stop journey that had taken it from Seymour Johnson air base in North Carolina, over the Atlantic on a non-stop flight path over Gibraltar and along the Mediterranean coastline to the borders of the Soviet Union.

The purpose of the non-stop flight was to allow the US to strike the USSR at any given moment.

However, just before 10.30am that day, disaster struck.

As the KC-135 refuelling plane approached the B-52, it accidentally overshot the bomber mid-process and the planes collided.

The bomber’s left wing was ripped off, causing an enormous explosion with 30,000 gallons of kerosene going up in flames, and the bomber broken apart.

But of even greater significance was the cargo now hurtling to the ground.

The plane was carrying four hydrogen bombs. A payload 100 times more powerful than the bomb that destroyed Hiroshima in 1945 was plummeting towards Andalucia.

Or, more specifically, to the tiny fishing village of Palomares, where the Almeria locals were going about their daily lives as usual, oblivious of the terror poised to rain down from the skies.

Half a century on, little is still known about this devastating event, even though the cleanup from the fallout is ongoing, with America signing an agreement to remove further quantities of contaminated soil as recently as October 2015.

Few people speak about the incident, while conspiracy theorists talk about a cover-up between America and Spain, which was then under General Franco’s dictatorship.

So what do we know?

A number of locals later revealed how they saw and felt an explosion, while one five-year-old girl claimed to see the sky ‘raining fire’ from shrapnel.

This was later confirmed to be radioactive material, including plutonium, that leaked into the subsoil over a wide area of the surrounding countryside.

But somehow, by incredible fortune, it was not a repeat of Hiroshima.

A hydrogen bomb needs to be ‘activated’ before it can detonate. This means that the electrical circuits in it must be wired correctly in order for fission and fusion to start.

Without properly preparing the bomb, a radioactive explosion will not happen.

So the ‘orange fireball’ in the sky, described by 83-year-old fisherman Pedro de la Torre Flores  was not actually nuclear armageddon but something more akin to a ‘dirty bomb’. And the payload from the bomb that exploded in front of him only knocked him off his feet, leaving him with scratches … at least on the surface.

One bomb landed in a dry river bed, another only half exploded, the fourth fell into the sea and was only retrieved months later.

The bombs fell with such force because their parachutes failed and much of their radioactive material was buried underground.

The region was declared radioactive, in secret, and the Americans sent in a team to cleanse the area.

Not 24 hours after the mishap, President Lyndon B. Johnson was in the ‘situation room’, where he and his administration were operating under a codename for the loss of a nuclear warhead: ‘Broken Arrow’.

Over subsequent weeks, the US removed 5,000 barrels of radioactive soil, in addition to compensating farmers for the loss of their tomato crops.

However, it was of little comfort to the locals, many of whom, it has been claimed, died from cancer in their younger years.

There is however, no concrete evidence to this, as Franco destroyed the medical records.

Indeed, it was not until four decades later in 2008 that the Spanish government discovered contamination was still present on 12 acres of land.

Secretary of State John Kerry has since pledged to clean up the mess once and for all.

A bill for nearly €29 million has been agreed and is certainly preferable to something that could have been incredibly worse.

Indeed, given the current dangerous gameplay between Kim Jong Un and President Trump, it may turn out to be trivial.