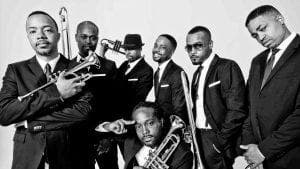 THE Hypnotic Brass Ensemble will return to Spain in September.

The prolific musicians, all brothers, and sons of jazz trumpeter Phil Cohran will perform at Marbella’s La Catarina on September 7 after a successful gig in the city last year.

Together they have toured worldwide with iconic artists including Prince, Mos Def, Mick Jones (The Clash).

Since releasing their first recorded project Flipside in 2004, the band has appeared at Coachella festival, The Sydney Opera House and Carnegie Hall, among others.