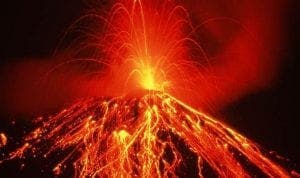 LA Palma has hit been shaken by HUNDREDS of earthquakes in the past few days, sparking fresh fears its active volcano is about to erupt.

A map released by the National Geographic Institute (NGI) shows exactly where the tremors have hit – mainly near the slopes of the massive Cumbre Vieja volcano.

Officially, 44 earthquakes of up to 2.1 magnitude rocked the sun-soaked island between Friday at 1.52pm and Saturday at 4.17am.

But experts believe the real figure could be as high as 352 – as many were too small to be officially recorded.

The NGI is now monitoring the area round-the-clock.

A team of geologists will arrive on the isle for CO2 profiles and to research the structure and strength of the volcano.

Experts from California and London have warned that if the funnel were to erupt it could collapse into the ocean and send a 500 mph tidal wave towards the UK’s south-west.

The report’s authors said: “The maximum impact would be felt in some key places in the Canaries… in La Palma, the city of Santa Cruz would be hit by two simultaneous flood waves with devastating consequences.”

The concerns have sparked panic among the island’s 86,000 residents.

The largest of the tremors which hit on 1pm on Saturday, registered 2.7 on the Richter scale and took place at 17.4 miles Underground.

This was narrowly followed by a quake of 2.6 at the same time on Sunday, and a third of 2.1 hitting the island at midnight on Monday.

These were followed by another ten tremors in a few hours.

The locals did not feel the earthquakes because the seismic movement is happening so low below the surface.

Government officials have called in volcano experts to examine the out of the ordinary seismic activity, which has been dubbed ‘a seismic swarm.’

Maria José Blanco, director of the National Geographic Institute on the island, said the island has never experienced anything like this.

The last time the volcano erupted was in 1971.

La Palma is considered to be the most active island in the archipelago.