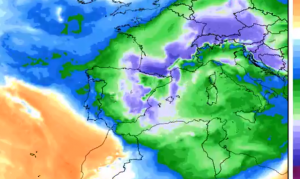 AN arctic cold front and intense rainfall will arrive in Malaga province this week.

According to weather agency AEMET, weak and scattered rains will fall today which will become more frequent tomorrow.

Ronda will collect 40 millimeters of rain in 12 hours on Wednesday.

The cold front coming from the Arctic will arrive from Ireland and the Cantabrian on Thursday, sweeping all the Iberian Peninsula and causing a fall of five degrees in the maximum temperatures, which will be between 15 and 16 degrees.

Thursday and Friday will be the coldest days but the low temperatures will remain until Sunday.

In the interior the cold will be more intense, expecting maximums of 10C and 11C for Ronda and Antequera, and minimums of 2C to 3C.

In addition, the snow level will drop to 1,500 meters.