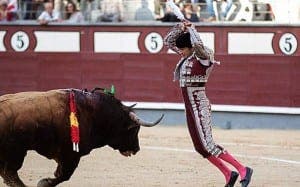 THE UN has called for a ban on children witnessing bullfights in Spain and attending bullfighting schools.

The Committee on the Rights of the Child has argued they need to be protected from the ‘harmful effects’ of the bloodsport.

The panel of independent experts that monitors the implementation of the UN convention on the rights of the child, said it was concerned by the impact bullfighting could have on under-18s as spectators at events and as pupils in bullfighting schools.

The committee suggested that steps be taken to curtail minors’ exposure to the controversial tradition.

In a report the committee said: “In order to prevent the harmful effects of bullfighting on children, the committee recommends that the state party prohibit the participation of children under 18 years of age as bullfighters and as spectators in bullfighting events.”

It added that it was anxious about the level of violence in Spain’s 55 bullfighting schools and asked whether the government had considered banning children from them.

One member of the committee said: “It’s not just child bullfighters, it’s also those who go along as spectators,” Gehad Madi told the online Spanish newspaper eldiario.es. “As a committee, we’re very concerned about protecting children from exposure to that violence. We hope the Spanish government and the governments of Spain’s autonomous communities will ban children from taking part in bullfighting activities.”

The Spanish delegation told the committee it would consider the recommendations.