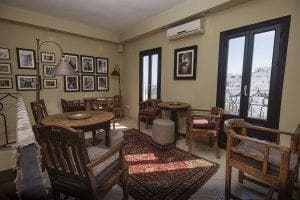 A WONDERFUL collection of old photos are an appropriate addition to the relaunch one of the Costa de la Luz’s most striking buildings.

The pictures from the family collection of owner James Stuart take pride of place in the stunningly renovated Teteria del Califa, in Vejer.

Serving as a poignant tribute to his father, the photos show the young entrepreneur travelling around a series of Middle Eastern countries with his father and his own two children.

Dating back to the 1970s, they include such exotic locations as Aleppo, Palmyra, Wadi Rum, Yemen and Lebanon.

“It’s a tour of the Middle East that includes us camping in the stunning cave palaces in Petra,” he tells the Olive Press.

Stuart, who owns the next door Califa hotel and restaurant, as well as various other local businesses, spent the last year commissioning original furniture and ornaments for the relaunch of the teahouse.

This included a one metre brass lamp from Morocco, which took two months to make, as well as a ‘marquetry’ inlaid ceiling that was built by craftsman Manolo Revuelta in Vejer.

“It was my girlfriend Ellie’s idea to redevelop the Teteria with a new sumptuous and exotic look,” he continues. “She also wanted to use my family collection of photographs for a personal touch.”

Scottish Ellie Cormie, who runs the top-rated Corredera 55 restaurant in the town, won Designer of the Year award for her work at Gleneagles golf course and the Malmaison Hotel.

She is currently undertaking a series of commissions in Gibraltar.

The Teteria, which opened over a decade ago, was always designed to be able to hold exhibitions so this is a fitting launch for the reopening.

As well as Stuart’s personal collection, there are a number of photos by celebrated photographer Wilfred Thesiger, whose Portraits of a vanishing world can be found at The Pitt Rivers museum in Oxford.

To complete the personal touch Stuart’s mother Sasha donated some Amzigh jewellery bought in the Atlas mountains of Morocco as well as an old family kilim from Syria.

Travel in the time of Covid: What it’s like to be the only hotel guest in one of Spain’s...

Andalucia’s creepiest places to give yourself a fright this Halloween

Fiona Govan - 17 May, 2022 @ 12:45
SPAIN has yet again extended the existing entry ban on non-essential travel by non-vaccinated travellers from a long list of non-EU countries, including Brits...