AS excited as a kid in a sweetshop, I snuck into the kitchen at Dani Garcia’s eponymous Marbella restaurant to salute nearly a dozen of my culinary heroes.

Joan Roca, Quique Dacosta, Angel León – NINE Michelin stars between them – stood chatting in a huddle, while legends Martín Berasategui and Ferran Adria discussed the jamon next to me.

I’ve waxed lyrical about their dishes over the last two decades, reviewed their restaurants, and even met them one on one, but to find them altogether in one small room was almost too much.

There are few words to describe just how important this gathering of chefs has become at the Hotel Puente Romano over the last five years.

Few events around the globe – and most certainly Spain – manage to draw such a key group of culinary wizards all under one roof.

There were meant to be 20 of them with 40 Michelin stars between them, but in truth there were many more, perhaps 30, not to mention dozens of scurrying sous chefs and wannabes.

Up-and-coming talent Josean Alija, from Bilbao’s Nerea restaurant, had even cut a holiday short to Thailand to make it home in time.

“It’s so much fun and informal, like the Andalucian food, fresh and vibrant and I am so happy to be here,” the one star man told me.

Celler de Can Roca genius Joan Roca put it more simply: “What an event, what a day and a real honour to be here.”

That coming from a man, whose restaurant has twice been named the BEST in the world by Restaurant magazine, and not been out of the top three for nearly a decade.

“I love coming down to Andalucia though. The extraordinary produce, the sardines, the fried fish, the gazpacho – it’s such a luxury… and the local talent gets better and better. I was actually staying in Marbella for Easter two years ago and the culinary resurgence has definitely come on since then.”

Three Michelin crowned Quique Dacosta, from Alicante, agreed on everything but one thing.

“Andalucia is full of chefs with dreams and creation and the produce is amazing… second only to Alicante,” he joked.

If ever proof was needed that he was wrong, step over Angel León – chef of the sea – who earnt Andalucia its first ever Three Michelin star restaurant at Aponiente, in Cadiz, last year. 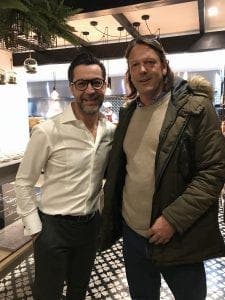 Beaming from ear to ear, he described the event as ‘una bestia’ in classic Andaluz parlance, and explained how he was as starstruck as me.

“To have so many incredible legends in one place is so amazing… and just an hour-and-a-half up the road from me, what a joy!”

They were all here of course, to pay tribute to the so-called ‘New Basque cuisine’ of Juan Mari Arzak.

Now 72, he was joined by his daughter Elena who now runs the restaurant, which has had three Michelin stars for three decades.

Sadly, I have yet to make it there, but did once eat at nearby eaterie Akelarre, run by Pedro Subijana, the man who Juan Mari Arzak credits as being his inspiration.

In a touching summing up of the event, Elena explained: “It’s fantastic to see so many people making the effort for my father. He is so happy too.”

I asked organizer Dani Garcia himself to sum up the event for me in three words. “Evolution and maturity.”

Few words would better sum up the Andalucian food culture over the last few years. It’s been an honour to be part of it.

Jon Clarke is the author of Dining Secrets of Andalucia (www.diningsecretsofandalucia.com)