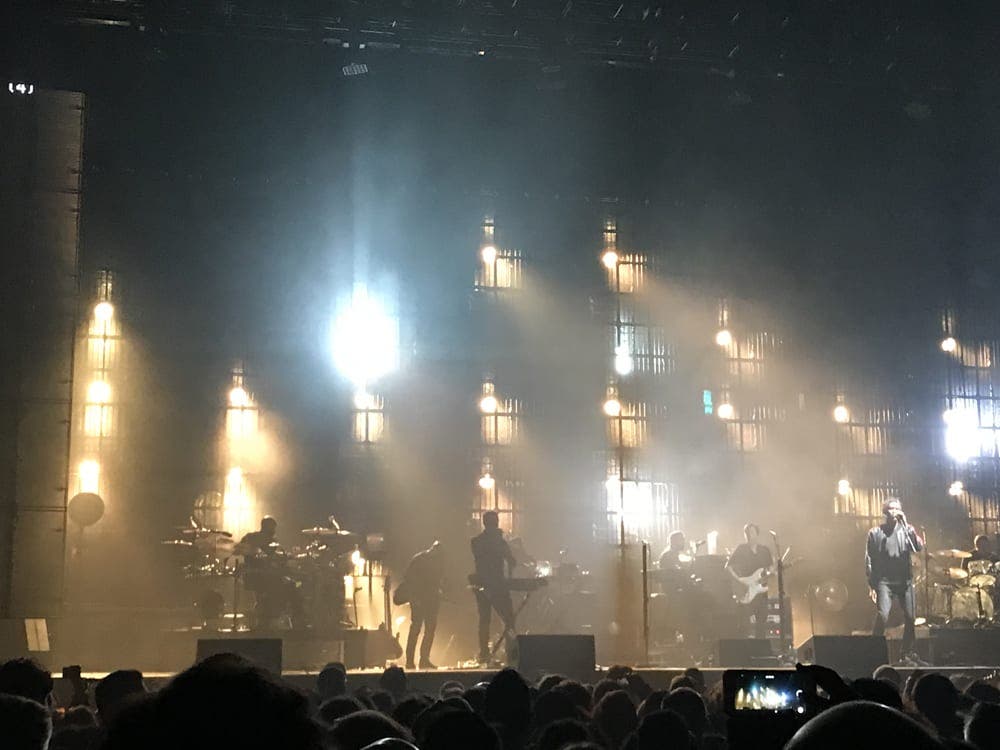 DARK, sinister and brooding. And as subversive, as ever.

Challenging the status quo – and audience – from the onset, the Bristol group launched an aural assault with two drummers at each side of the stage.

And they did it very much their way, coming on after five minutes of complete unsettling darkness, and walking off without an encore, nor a single word to the thousands of fans at the Palacio Vistalegre, in Madrid’s scruffy southern suburbs.

The set was designed to look like a prison, asylum or council estate from the outside with lights intermittently spitting in and out.

A backdrop projected images of the global pariahs that have so enflamed the lifeview of singer and songwriter 3D, aka Robert del Naja, a massive critic of the Iraq war let’s not forget.

Tony Blair, Putin and, of course, Donald Trump took the brunt, with the American leader soundly booed every time his face flashed up.

With harrowing visuals of terror victims, bombings in the Middle East and the infamous 9/11 Attacks, it was completely mesmerising.

It coordinated well with a series of statements, the best, a chilling reminder that we are being spied on and followed around all the time, via our phones and computers.

This is an original, concept tour hooked on the 21st anniversary of their seminal Mezzanine album, interspersed with the concept of memory, looking at some of the band’s favourite musical memories over the last few decades.

“A tour about the ghosts of our past,” is how Del Naja described it to El Pais at the weekend.

It meant some somewhat unusual cover versions, including obscure (but brilliantly delivered) Bela Lugosi’s Dead, by Bauhaus and the rather better known 10.15 Saturday Night by the Cure. Drip, drip drip…

In between, we had some excellent high points from the album, the best being the moving Teardrop sung by the Cocteau Twins Liz Fraser, who also delivered Group Four and Black Milk, with haunting appeal. Although perhaps a touch quietly.

Angel was the best way to end the show though, with the soulful pleading lyrics from reggae legend Horace Andy…and fittingly the weekend actor Bruno Ganz who played film noir fallen angel, in cult classic Wings of Desire, should die.

Huge-selling Mezzanine went straight in at number one in the UK and has sold millions since.

It was one of the most influential albums of the 1990s and as dark as it was powerful.

Reviewing the album for NME, critic Keith Cameron said: “It’s hard to think of another band since Joy Division with such an aptitude for articulating the despair that lurks at the very heart of darkness.”

As they left suddenly at 11.06pm on Sunday night, without so much as a wave or goodbye, that dark heart continued to pump as strongly and relevant as ever. Cutting-edge stuff indeed.