“IT was a long shape made up of orange or red lights, moving in all directions across the sky, hovering and moving up and down.

“First came a really loud noise, which I first put down to an aeroplane passing,” insists former teaching assistant Lin Campbell, 55, who lives in Sabinillas.

“But it just did not seem to move away.

“The noise kept coming and going but without any fading in and out. There were no other lights or craft in the sky although towards the end we could hear a helicopter.

“The craft eventually moved off to the Estepona area and I went back to bed, but a few minutes later I heard the noise again and rushed out to see the lights again off in the distance over Estepona.”

It sounds like a scene out of War of the Worlds, but incredibly, this is one of a number of accounts given by Olive Press readers, following a deafening buzzing in the sky that woke thousands of people up at 5am on Easter Sunday.

Most witnesses – and there are dozens who have been in touch – reported seeing up to three loud fighter jets and a helicopter ‘searching for something’ along the coast.

But there were two – Campbell and a former company director Mary Ann Whyte Wood (below), 61, who reported seeing a ‘large, gold, cigar-shaped object’ – which suggest something altogether rather more sinister… or exciting depending on your point of view! 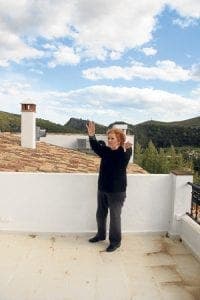 With the Olive Press newsroom inundated with emails and calls, we spent a week investigating the event, only to be met by puzzled police and, quite frankly, unhelpful airports.

Finally the Spanish Air Force confirmed that, yes, it had scrambled a Eurofighter jet (only one, mind) to ‘intercept an unidentified plane without a flight plan’.

A spokesman added however that they were not able to find the plane, nor had any idea ‘what it was doing’.

Suspicious? You bet it is.

Without wanting to spread alarm or make outlandish claims about little green men, several elements of the official story just do not seem to add up.

Firstly, why scramble a 67 million euro fighter jet to investigate a possible drugs plane? And why did many witnesses talk of three planes, when only one was confirmed? And what about the helicopter?

Could they have been searching for some sort of military prototype that might have crashed into the sea? Or could it have been, yep, you guessed it… a UFO?

Spain has certainly been something of a hotspot for claimed UFO sightings over the last few decades.

On the Mutual UFO Network, 41 reports have been made in Spain in the last three years alone – more than double than in neighbouring France.

The reports make fascinating reading with talk of ‘spherical and cylindrical objects’, antennae, white lights, fast-moving red lights, and even urges to ‘bow down’ to mystery objects in the sky.

“Aliens make people do whatever they want,” declares one contributor after spotting an ‘oval shaped UFO’ in Valencia in 1995. “They are controlling us, but they do it in a way we don’t realise.”

And while some explanations seem, to put it bluntly, barmy, many accounts appear to come from perfectly credible and rational people.

It is hard, for example, to ignore the evidence within one photo filed by a David Stahl in 2009.

David’s late father, the US artist Ben Stahl, had apparently caught a mystery object with his Nikon camera off the coast of Torremolinos in 1958 (top picture).

While photographing a boat to be used as the subject of a painting, Ben inadvertently took a picture of a strange, bird-like object in the sky.

As David – also a photographer – points out, the image is unlikely to have been doctored since the mystery object’s shadows are consistent with the rest of the photo.

“And it isn’t a tear in the emulsion on the negative because the edges of the object are whole,” insists David, who also says the object’s blurring means it cannot be a seagull.

“The strange thing is that Dad never said anything about it,” he ponders. “He really would have told everyone if he had seen a UFO.”

The photo was later studied by a photographic analyst, Dr Bruce Maccabee.

“The nearly horizontal upper edge of the image appears quite sharp, indicating that it was a real object out there,” he says.

“It looks as if there is a shadow of a ‘wing’ or some structure on the ‘fuselage’ of the object.”

To add a twist to the tale, Stahl reportedly had a contact, Roger Early, within Project Blue Book – a US Air Force study into UFOs which ran from 1952 to 1970.

“Their friendship would suggest that, if he thought he had seen a UFO, he would have said something at least to Early,” suggests Maccabee.

“One might speculate that he did say something and was told to shut up about it.”

One person who would certainly agree is expat Susan Senior, from Benahavis.

She is convinced that what she saw was a UFO on Easter Sunday.

“It was definitely a UFO,” she told the Olive Press.

“There are literally millions of them waiting to land and save the planet from destruction.

“It’s all related to the Mayans, but the news channels are blocking everything.

“I am a level-headed person but I am very intuitive and I know it is all to do with the energy of the planet, and that they are our ancestry.

“We didn’t come from apes – we came from the stars,” she concludes. Hmmm.

Please email newsdesk@theolivepress.es if you saw the UFO or have any further information.

AS well as numerous sightings on the Costa del Sol, the city of Granada is something of a UFO-spotting hub.

Since the mid-1980s it has hosted a yearly meeting specifically geared for UFO sightings, started by a group of believers who were convinced they were communicating with extra-terrestrials from the planet ‘Ummo’.

The meeting is held on July 7 each year because the number seven is deemed to be powerful by numerologists, who find meaning in numbers.

While ‘Ummoism’ was later discovered to be an elaborate hoax spreading to the UK and France, the July 7 meetings have continued to the present day in Granada.

A core group of devotees camp out in the Llano de la Perdiz area of the city until the early hours of the morning in the hope of seeing something out of the ordinary.

“In 1989, 1991 and 1993 there were supposed UFO sightings during the July 7 meetings,” confirms Antonio Salinas, director of Granada University’s Ufology Department, which investigates the paranormal using science.

“However, we now know for sure that the 1991 sighting was a trick played by the same people who had pretended to be extra-terrestrials before,” he tells the Olive Press.

“They flew microlight aircrafts illegally at night and made a series of light shows across Granada’s sky.”

“We don’t have enough information about the ‘89 and ‘93 sightings – but after what happened in ’91 anything is possible,” adds Salinas, whose book on the subject, Misterios de Granada (Granada Mysteries), is conveniently out next month.

Salinas also confirms that western Andalucia appears to have a higher concentration of UFO sightings – but puts this down to a longer history of research in these areas.

He does however, remain sceptical about UFO sightings.

“It is a complex phenomenon with many different implications,” he says.

“There is a huge percentage of cases that, after serious consideration, turn out to be misunderstandings or misperceptions.

“It is true that there are a small percentage of cases without explanation. And there are several hypotheses for these. One is that UFOs are actually of terrestrial origin, that they are prototypes from the military.

“The most popular hypothesis is that they are of extra-terrestrial origin, but there is no real evidence for that.”

Alex Trelinski - 10 Dec, 2022 @ 08:45
ALICANTE clearly loves this time of the year as its home to the world's biggest nativity display as well as one of the country's...