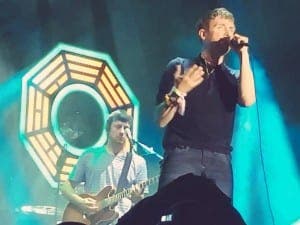 WITH a melon on his head and a massive smile Damon Albarn emphasised the new era for his eponymous britpop band Blur.

Headlining at Spain’s top music festival in Benicassim, it was clear he and his fellow band members were once again good pals; and tighter than ever.

In an incredibly slick and varied set the band wowed the mixed English/Spanish audience, on Saturday night.

Running around the stage and jumping up and down like a teenager, Damon showed he is still one the world’s best front men, despite being in his mid 40s.

Almost launching himself into the audience during his appropriately-name song Thought I Was a spaceman, he was clearly loving every moment of this 2-hour headlining slot.

It couldn’t have been clearer when at one point he ran to the front to ask a fan to try on his half melon hat… And duly did to a rapture of giggles.

Described by one Spanish newspaper 20 Minutos as one of the ‘best ever live performances’ in the festival’s 21 year history, the band mixed up their big hits including Song 2, Beetlebum and Parklife with wonderfully obscure tracks such as Trimm Trabb from the band’s mixed 13 album.

Top highlights included Badhead, There’s no other Way, while the Spanish crowd went crazy for Girls and Boys and Tender.

At one point resting his head tenderly on Graham Coxen’s shoulder it was clear previous differences had been put behind them.

Bassist Alex James – now an organic farmer – smouldered at the back often with a cigarette in his hand, while drummer Dave Rowntree bashed out the rhythm in his Fred Perry shirt, one of the few concrete reminders of their early London days.

The transition for me, having seen them formulate their sound at the dingy Laurel Tree pub in Camden Town in the mid 1990s, is of a growing maturity and understanding of the world around them.

Theirs is often now thought-provoking music and it is no coincidence that two of the highlights here were the moving Out of Time with its haunting African timbre and the brilliant Lonesome Street, both from their last two albums.

Whatever happened to that famous rivalry with Oasis? No one would deny they have won hands down.

None of the estimated 10,000 fans, who were crammed in and some clearly struggling with temperatures of up to 30 degrees, would argue. This even at 1am, despite a 10 minute thunderstorm that earlier cooled the air.

The band didn’t seem to mind – nor did the joyful new brass and choir sections, which emphasised their growing musical depth.

They had been perfectly set up by a rousing performance by the Kaiser Chiefs an hour earlier. Their lead singer Ricky making various references about how excited he was about seeing his heroes Blur later, and revealed he would be right in the middle of the audience.

The band predictably ended with a wonderful rendition of The Universal leaving fans at 3 am to savour more festival fun.

‘Buenos Noches’ he shouted to the fans as he stumbled off stage… Yes, Damon, a Buen Noche indeed!