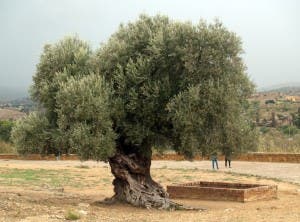 HUNDREDS of Spain’s oldest olive trees are being uprooted and sold to foreign buyers.

Trees over 1,000 years old are being snapped up by rich investors for garden ornaments in the Middle East, northern Europe and the USA.

Environmentalists are now fighting back to keep Andalucia’s oldest olive trees in Spain.

With trees selling for as much as €100,000, the Felix Rodriguez de la Fuente Foundation is appealing to the European Parliament (EP) to push through a law change to ban the uprooting and sale of these trees.

The group has launched a change.org petition addressed to the EP, which already has over 145,000 signatures.

“We must stop this intolerable plundering of our natural and cultural landscape,” a spokesman for the group said. “The business is only going to get bigger, men with big money bags are ruining our heritage.”

He added: “The European Parliament must step in to protect these jewels from being ruined.”

While no national law currently exists in Spain to protect aging olive trees, France and Italy have both recently introduced legislation to protect their groves.

The Valencian regional government has similarly prohibited the export of trees over 350 years old since 2006.