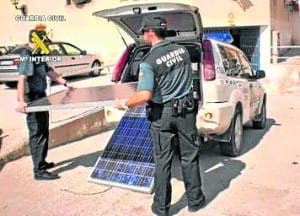 Any owners who have failed to register their photovoltaic (PV) installations and connect to the national grid by this week are facing fines of up to €60million, claims Greenpeace.

The new law that was passed in October last year, makes producing your own photovoltaic electricity entirely unprofitable.

Under draconian rules, government inspectors have now been given the right to break into homes to check panels are registered and properly connected.

A Greenpeace petition with more than 60,000 signatures against the ‘impractical and indefensible’ fines has so far been completely ignored by the PP government.

“Every party except the PP has now rejected it so we are hoping for a new government that will allow self-sufficient consumption to grow,” she added.

The hefty sun tax has been very damaging to Spain’s green economy.

John Wolfendale, CEO of green building firm Eco Vida Homes, claims solar panels are now becoming too expensive and too risky to use.

“It’s barely worth it anymore and a real backwards step for Spain,” he explained.

“It is becoming common for clients to refuse panels because of they are worried about these completely crazy taxes and laws.”

A spokesman for the government’s Department of Industry said: “Solar panel owners with non-regulation systems will be fined, it’s as simple as going over 120km per hour on the motorway.”