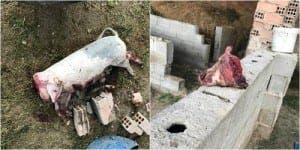 A GROUP of young teenagers have been arrested for torturing animals and then sharing horrific photos on Whatsapp.

The group were also planning to snatch a random girl on Halloween and torture her in a similar manner.

In total five minors have been detained for mutilating and killing a number of pigs and goats in Murcia.

They put a number of the videos out on Whatsapp including one of a goat being attacked on the street and then killed later.

The attacks are believed to have taken place on a number of private estates near to Molina de Segura thought to be owned by the youngsters parents.

The police have also said that they were planning to kidnap a girl and give her ‘a beating’.

They planned to carry out the attack while wearing Scream masks.

All of them have been charged with several counts of animal abuse, burglary and criminal damage.