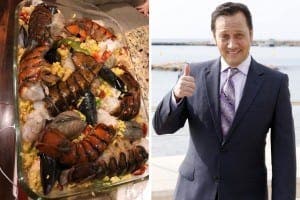 HOLLYWOOD actor Rob Schneider is the latest celeb to make the schoolboy error of putting his own spin on the classic paella.

The Deuce Bigalow star tweeted a picture of his take on the traditional dish on Christmas day, which included giant lobsters and clams, only to feel the wrath of unimpressed Spaniards.

“Dude, that paella is a 2.5/10 quality. Come to Spain to taste the REAL ONE,” Spanish Youtuber Liberty-Mario sniped at Schneider, before later downgrading his rating to an even more brutal 0.033/10.

Another Tweeter said: “This is not paella: this is rice with things.”

While journalist Manolo Montalt added:“If this is paella, my balls are carnations.”

“What?! You forgot the chorizo!!” joked one reply, making reference to Jamie Oliver’s now infamous take on the dish which included the Valencian no-no of chorizo.

In attempt to assuage his haters, Schneider only added fuel to the flames, Tweeting: “For the people of Sevilla who were insulted by my paella, I didn’t mean to use lobsters. They crawled in the pan by themselves!”

Spanish chef Jose Andres responded: “Paella is from Valencia…. Breath in, breath out! Mayhem has broken… you maybe handcuffed if you travel to Valencia!”