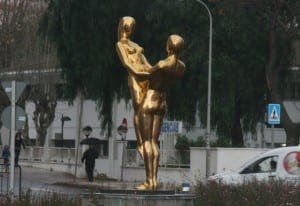 THE year started as it meant to go on, with people in high places falling from grace for cooking the books. The former mayor of Axarquia was jailed for property fraud and, in an exclusive OP story, Estepona Mayor Jose Urbano came under fire for splashing €50,000 on a gold-plated statue (right) without seeking the approval of his council.
On a national level, Spain’s politicians scrambled and maneuvered after the December national elections failed to produce a majority government. The parties failed to form a working pact, leading to a 10-month deadlock.

EXPATS won a small victory as it was revealed that any Brit who had lived abroad for 15 years or less would be able to vote in the upcoming EU referendum.
A campaign by the OP saw Spain forced to overturn the ridiculous ban on ‘friendlies’ between Spanish and Gibraltar hockey teams.
British expat Teresa Smith warned OP readers to read the small print after she was signed up to a €100,000 mortgage by notorious conman Jose Luis Maseda.
And we printed a special ‘Animal Rights Focus’ issue after a decade of reporting on animal cruelty across the country.

IN one of our biggest celebrity exclusives ever – which received international press coverage – we tracked down the Thai-based conman selling stolen photos from John Lennon and Yoko Ono’s wedding, worth more than €128,000.
In another exclusive, we revealed that AWOL estate agent Anika Elena van der Pluijm faked her own death after vanishing with up to €1 million of expats’ deposits.
We also revealed how 95-year-old World War Two hero Colonel Leonard Berney – who helped liberate the Belsen concentration camp in Nazi Germany – was banned from Gibraltar, having spent his post-war life running financial scams out of Marbella. 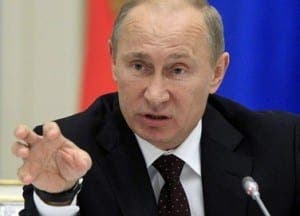 MARBELLA-based Hollywood stuntman Peter Wicke told the OP exclusively how he was suing Dutch fraudster Jan Brinkman, to whom he gave thousands towards a company that would never be set up. The story inspired many more victims to come forward and uncovered another unsavoury character hiding out on the Costa del Sol.
San Pedro’s Triple A animal shelter saw its president, secretary and staff arrested for alleged animal cruelty in a controversial raid that, many say, used excessive force.
Elsewhere, Gibraltar issued concerns over Vladimir Putin’s unofficial submarine base in Ceuta, criticising what they saw as Spanish support for the Russian regime.

DISABLED expat John Gray was given two months to move out of his home by Alhaurin el Grande Town Hall to make way for a one-way road system, and was offered an ‘insulting’ €35,000 for the home he had paid €66,000 for.
A serial cat killer was on the loose in Sotogrande after two pets were found drowned and hanged in the exclusive resort.
Publisher Jon Clarke got up close and personal with some of his foodie heroes as dozens of world-class chefs – with 71 Michelin stars between them – descended on Marbella for an event, here, with Ferran Adria. The month closed with some much-needed justice as Wesley Capper, Simon Corner and Dave Mahon – all of whom are linked to the disappearance and murders of three different young women – were locked up in the same week.

AIR quality for Gibraltar was revealed to be ‘unsafe’ and worse than all but two places in Spain in a damning World Health Organisation report.
We launched a fund to help the Bolivian mother (left) who was killed by Wesley Capper in a hit-and-run, which would raise thousands to help support her grieving husband and newborn in Marbella.
And in our last June issue, printed on the eve of Brexit, we outlined the battle ahead and the hopes of the majority of expats and Gibraltarians.

FOLLOWING the shock of Brexit, we published our first ever front page in Spanish.
‘Dejad que nos quedemos’ (right) appealed to Spaniards to support a petition to give British expats dual nationality in Spain.

We also revealed that thousands of eligible expats lost out on the crucial vote due to postal errors and registration issues, and duly pressed the British government to safeguard the rights of expats in EU countries.
Suspected conman Jan Herman Brinkman, who duped a Hollywood stuntman in a multi-million deal, was revealed to be a member of a huge crime family following talks with dozens of his victims.
And there were cheers in Gibraltar when Gorham’s Cave was declared a UNESCO World Heritage site, a ‘first’ for The Rock.

BRITISH killer Westley Capper (right) was released from prison just three months after murdering a Bolivian mother. At the time, he was also being investigated over missing expat Agnese Klavina.
On the run Irish gangster Francis Delaney was spotted in Fuengirola, eight years after fleeing Ireland and a multi million pound drugs charge. Despite the sightings, police were not able to track the Kinahan-linked criminal down.
Elsewhere, we highlighted the heart-breaking stories of African migrants attempting to cross the Mediterranean to escape persecution. The family of a Gibraltar fisherman wrongly incarcerated in a Ceuta jail revealed his traumatic ordeal to the Olive Press. Jared Pincho was released after unjustly being accused of assault.

ROCK readers had double cause for celebration as the Gibraltar Olive Press celebrated its first anniversary in print and our debut Gib Rocks magazine rolled off the presses with features on Rolling Stone Brian Jones’ trip to the Rock and the biggest night in Lincoln Red Imps history.
Gibraltarian pride was bolstered by Fabian Picardo, who used the Rock’s National Day to reinforce its resolve to remain British, post Brexit, whatever the challenges.
In Spain, an expat fraudster died after scamming a string of investors in a bogus truffle scheme in Ronda. Wendy Smart was accused of embezzling €4 million of their money.

CONVICTED rapist Mohammed Jahangir Alam, one of Britain’s most wanted fugitives, was finally snagged by police while on the run in Tenerife.
An expat couple were left devastated after their dream holiday home in Tozar, Granada, was sold to their neighbour at an auction without their knowledge.
Similarly hacked-off were Diane and Francis Jones, who were landed with a large bill after Francis’s leg was amputated at Xanit Hospital in Benalmadena.
Casares town hall staff appeared in a sensational trial over allegedly falsifying documents to allow gangsters’ money to be laundered on the Costa del Sol.
Controversial Weekend World publisher Stan Israel was forced out of his ‘international headquarters’ in Estepona due to owing the landlord €23,000 in unpaid rent.
A furious parliament debate was sparked after doctors accused Gibraltar Health Authority of corruption.

The OP’s 10th year in print was celebrated with a string of gold-plated exclusives.
A Most-Wanted paedophile was snared, thanks to an Olive Press stakeout. Our reporters tracked down Matthew Sammon in Fuengirola before calling Guardia Civil to arrest him in a dramatic midnight raid.
Hungry for more, they set off on the trail of prolific British fraudster Mark Acklom, uncovering more tales of his wrongdoings in Murcia. Our story prompted Elena Escuverra to confide to the Olive Press in how she almost fell into the same trap as thousands of other unsuspecting women conned by Acklom.
Meanwhile, convicted people smuggler Stephen Jackson got in touch to try to clear his name after being linked to missing Scottish mother Lisa Brown.
Bent mayors Jose Manuel Martin Alba of Alcaucín and Antonio Barrientos of Estepona found themselves in the dock over huge corruption charges.
And Gibraltarian explorer Jon Bonfiglio revealed his incredible story of survival after getting lost in a Mexican jungle.

NOT even the weathermen could have predicted the devastation wrought by floods at the start of the month which left two people dead and hundreds homeless. We worked around the clock to bring exclusive updates and championed the noble fundraisers set up by our readers to help victims.
We also revealed the shock tactics of burglars who gassed families in their homes before stealing their property.
Meanwhile, Welsh boxer Jake Vallely was found guilty of the murder of private Matthew Boyd, who served in the Royal Gibraltar Regiment.
More cheering Gibraltar news came from Kayley Mifsud, who did the Rock proud when she flew to the USA to compete in the Miss World pageant. Sadly, she did not win.

Oops, we did it again! How the Olive Press reported from the wildfire in hills above Spain’s Costa del Sol

Protect your finances in Spain with the experts – Smart Currency