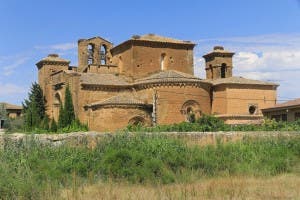 A SPAT over medieval artworks has reopened rifts between Madrid and Cataluña.

Catalan leaders are being accused of undermining attempts to repatriate priceless Romanesque frescoes.

The 12th century pieces were removed from Spain during the Spanish Civil War and Franco era, before being deposited in museums in neighbouring Cataluña.

The Monasterio de Santa Maria de Sijena in Aragon, which originally held the pieces, says they must be returned.

Two Spanish judges ruled the artworks on display in Barcelona’s Museu Nacional d’Art de Catalunya and a museum in nearby Lleida belonged to the monastery and should be returned immediately, but Catalonians saw it as an anti-Catalan verdict.

“Aragonese authorities have a great interest in recovering pieces in Catalan museums, but have no desire to recover other objects from Sijena that are, for instance, in the Prado in Madrid,” said Santi Vila, Cataluña’s cultural minister. “Why? For political reasons.”

Cataluña has returned some of the smaller pieces but has refused to hand over the 44 more valuable works in Lleida, insisting the larger murals cannot be moved without causing irrevocable damage.

Cataluña is now appealing the decision in a battle that has become emblematic of Madrid-Catalan tensions, which have deteriorated since the region’s first minister Carles Puigdemont promised a ‘legal and binding’ plebiscite on independence this year.