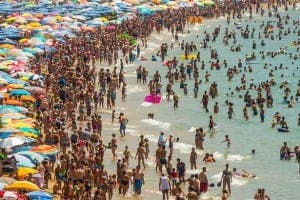 BRITS are being put off holidays in Spain by the pound’s drop in value.

More than 40% of Britons will change their holiday plans because of the post-Brexit devaluation, according to data from travel insurer Columbus Direct.

Holidaymakers converting £500 to euro will get £65 less than they would have done last year.

Because of this, up to eight million holidaymakers will opt for a ‘staycation’ rather than holidaying abroad.

Spain and the Eurozone is losing popularity generally as a destination, as Britons believe can get more value for their money in other countries such as Japan, Malaysia and Mexico.