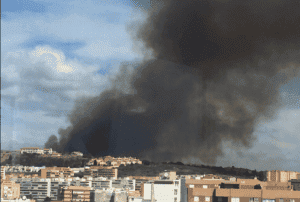 UPDATE: The fire is believed to be under control

A FIRE has broken out in the San Bernabé and La Granja area of Algeciras.

Dozens of residents have been evacuated after the roof of one of the houses was lit.

Several neighbors have had to be treated by smoke inhalation.

The fire, which has been intensified by the strong easterly wind, has forced the closure of roads in Los Barrios.

The area of vegetation that is now burning is right next to Adalides school, which has been evacuated.

There are 23 firefighters, two helicopters and two fire trucks tackling the flames.