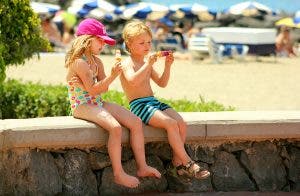 A SUNTAN is a sign of skin damage, not glowing health, NHS England and the Met Office have warned parents ahead of the summer holidays.

It comes after a recent survey suggested a third of parents mistakenly believe going brown is good for children.

The findings come from interviews with 1,000 parents with children aged 11 and younger.

One in 10 said they had told their child to take their top off in the sun to avoid getting tan lines.

Meanwhile, a shocking 21% of parents said they would only apply sunscreen on their kids if they started to go red and burn.

A tan does not stop the sun’s harmful rays from causing harm and is actually a sign that the skin has been damaged and is trying to protect itself.

After our skin has been exposed to sunlight, cells called melanocytes produce more dark pigment, called melanin, in an attempt to absorb further UV radiation, and so the skin becomes darker.

NHS England has advised the children cover up with suitable clothing and spend time in the shade – particularly from 11:00 to 15:00.

They should also wear at least SPF15 sunscreen.

“UV levels are usually highest between May and September. Clouds don’t always stop UV rays, and unlike the sun’s warmth, it’s difficult to know when they may be harming you.”