THE EU has ignited a fresh row over Gibraltar by labelling it as a ‘colony’ of Britain in new Brexit legislation.

It came as MEPs settled on an agreement giving Brits the right to visa-free travel in Europe after the UK leaves the EU.

The text guarantees that Brits travelling in the EU will not have to pay the £52 for holiday passes, even if the UK crashes out of the 28-member bloc.

But a controversial ‘colony’ footnote was inserted into the text at Spain’s insistence, prompting much anger among MEPs and the UK Government.

British MEP Claude Moraes, who was removed as the rapporteur on Monday, claimed the move had come after ‘a long campaign of bullying’.

Meanwhile, a UK Foreign Office spokesperson said: “Gibraltar is not a colony and it is completely inappropriate to describe in this way.”

But Spanish MEP, Esteban Gonzalez Pons said Spain has, ‘obtained the fundamental support of the European institutions in the dispute over Gibraltar’.

The legislation containing the insulting reference to the Rock was passed 38 votes against eight by the committee on Civil Liberties.

The footnote reads: “Gibraltar is a colony of the British Crown.

“There is controversy between Spain and the United Kingdom concerning the sovereignty over Gibraltar, a territory for which a solution has to be reached in light of the relevant resolutions and decision of the General Assembly of the United Nations.” 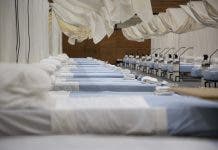