A BALD attempt to smuggle drugs into Spain has been stopped after a man was found with half a kilo of cocaine hidden under his toupee.

Arriving at Barcelona airport from Bogota, the Colombian man attracted suspicion with a disproportionately large hairpiece under his hat.

Officers detained the man and found a package stuck to his head with about €30,000 of cocaine.

A police statement said: “There is no limit to the inventiveness of drug traffickers trying to mock controls.” 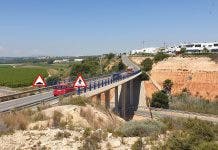