A BRITISH mother and son spent a hellish 60 hours flying home from southern Spain after Monarch’s collapse and the wave of Ryanair cancellations left them stranded.

Tom Payne, 24, treated mum Sharon Morris to a trip to Alicante as a reward for caring for her husband and his stepdad Wayne Morris, who was recently given the all clear following cancer treatment.

However what was meant to be a well-earned dream holiday quickly turned into an expensive nightmare when flight after flight was cancelled and they ended up travelling home via five different airports in three countries, forking out an additional £600.

The pair started their journey home in Alicante and flew to Mallorca, then Barcelona, followed by Toulouse in France before finally landing at Luton.

The pair – amazingly – were able to keep their cool, all the while keeping family and friends back home entertained by posting amusing updates on social media. 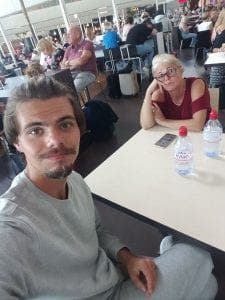 The nightmare began when their flight home from Alicante was cancelled after Monarch went into administration.

The pair then bought a Ryanair flight, only to be told 27 hours before take off that it had been cancelled too.

Tom and Sharon, still believing they could get home that day, then decided to fly home to England via Italy.

Tom told his friends via Facebook: “So as the only affordable alternative we are now taking an alternative flight to Italy then from Italy to England! If there are any more issues – especially once I get to Italy…. I will disappear and spend the rest of my days eating pasta.”

But he and his mum’s flight to Milan was delayed by four hours, meaning they would have missed their connection home, so they had to change strategy.

Posting on Facebook, still from Alicante airport, he wrote: “3rd cancelled flight to come home! Good job we got a sense of humour …. I better have a welcome party when I finally make it!!”

Just after 2pm the day after Tom’s first post, the pair revealed their fourth plan – fly to Palma in Mallorca, then onto Toulouse in France and then home.

But after arriving in Mallorca, the following morning, delayed flights meant they couldn’t complete the next leg of their trip to Toulouse directly, and so had to add in another detour, via Barcelona. 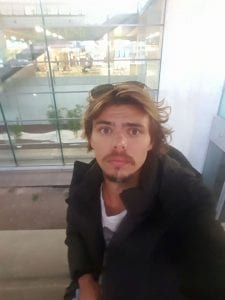 But there were no flights to the Catalan capital until the following day so they made the most of their time in Palma, visiting monuments and going shopping.

At 3pm the next day – three days into the journey – Tom and Sharon arrived in Barcelona, and celebrated by ‘checking in’ to the airport on the social media site.

Less than four hours later they had finally made it to Toulouse.

And finally, after boarding an easyJet flight in France, the exhausted pair made it back to London Luton Airport, just before midnight on Thursday evening – more than 60 hours after arriving at Alicante airport.

A direct flight between the two airports usually takes less than three hours.

Tom said on Facebook: “In the UK after a 57 Hour journey from Alicante! Sharon Morris we nailed it!”

Speaking to Mail Online, Tom said: “I’m still exhausted by the whole thing. It was a palaver, an absolute shambles.

“Everything that could have gone wrong did go wrong and you just could not make it up – it was like a comedy.

“It got so bad I considered swimming a couple of times.”

Tom added: “We had to take it in good humour.

“We had two choices – sit there and cry or take it for what it is and laugh.

“We couldn’t shout at anyone because what was it going to achieve?

“It was laugh or cry and we decided to laugh.”