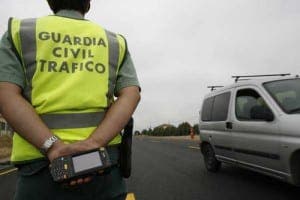 SOME 25,000 drivers in Spain are to be tested for drugs and alcohol every day this week.

The checks are part of a campaign by the Direccion General de Trafico (DGT) which aims to raise awareness of drug-driving.

The traffic arm of the Guardia Civil have intensified controls, with stop checks already in place across the Costa del Sol including in Marbella, San Pedro, Estepona and La Linea.

Gregorio Serrano, director general of Traffic said: “The objective of the campaign is to make citizens aware that not only is alcohol driving dangerous, but also drug driving, which is often synonymous with death.

“Carrying out these preventive road checks, along with road education, is one of the most effective tools to discourage drivers from getting behind the wheel if they have consumed any psychoactive substance.”

The annual report by the National Institute of Toxicology and Forensic Science found that in 2015, 43.10% of drivers killed in accidents tested positive for alcohol, drugs and/or psychoactive substances.

Those who test positive for alcohol or drugs will face a €1,000 fine,

Anyone found driving with drugs in their system could face three to six months in jail.

The campaign will run until December 18.